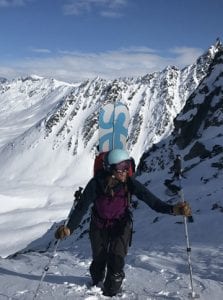 In April of 2014, my brother called and asked if I wanted to go on a hut trip in the Wallowas with six of his ski-a-hundred-days-a-year kind of friends. I had just returned home from a trip to Argentina where I had taken on a number of outdoor pursuits, including getting to the top of Aconcagua. I was feeling accomplished, and perhaps a bit cocky, and I said yes. When we got out there, my visions of racing up the mountain and showing the boys that I was competent— despite having never been backcountry skiing— were shattered. And, I was hooked. Since then, my passion for splitboarding has taken me around the West. I’ve invested in avalanche courses and snowpacks, I’ve learned how to move quickly and slow down to enjoy, and I continue to get my butt kicked in the mountains.

When I graduated college with an International Nutrition degree in 2013, I put my degree to use spending almost a year in Rwanda and Laos working for non-profit organizations. I enjoyed learning how challenging and dynamic the non-profit world can be, but Alaska beckoned, and I came. I dropped the nutrition world to become an outdoor guide in the mountains, on ice, on rivers, and on the ocean. I’ve grown as a leader and an outdoor enthusiast, and I’ve fallen in love with the North. My husband and I bought property in Haines Junction, YT and spent the summer learning (very much learning) how to build a home. We’ve chosen to live up here not despite the long winters, but because of them. Right now, we split our time between Haines, Alaska and Haines Junction, Yukon and plan our lives around our play.

Leslie joined the AAIC Board in November and was elected to the position of Secretary in January 2019.