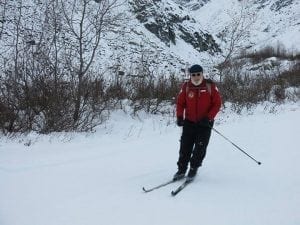 Eric began touring in the Canadian Rockies early in life and joined Ski Patrol in 1966. He was soon involved with helping teach avalanche classes throughout western Canada. He has been involved with avalanche assessment and mitigation through the 1970s including proposals for new Olympic venues. Ski Patrol and avalanche education has taken Eric through Alberta, British Columbia, Montana, Idaho, Oregon, Washington and Alaska. He is a professional member of the American Avalanche Association and has assisted with teaching at the National Avalanche School since 2007. AAIC is proud to have Eric join the team to help further promote and support avalanche forecasting and information sharing in Alaska.