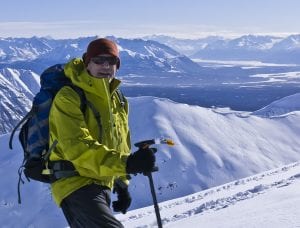 Ralph Baldwin joined the AAIC Board of Directors in November 2017.  Coming from New England rock and ice climbing roots, his passion for mountaineering has led him to make ascents throughout North America.  His mountaineering resume spans nearly five decades. He served on the rescue team out of Jenny Lake Ranger Station in GTNP, made a traverse of Denali as an NPS volunteer for DNP and served on the Alaska Mountain Rescue Group.  Ralph is a retired public school educator having taught in both the villages of western Alaska and on the road system of southcentral Alaska. As a bush teacher in western Alaska and a homesteader in southcentral AK, he participated in long-distance snowmachine trips. He brings to the AAIC board, the experience of serving on several non-profit boards with an emphasis on outdoor recreation and the environment, the most recent being the Mountaineering Club of Alaska.

He has called Alaska his home since 1979. His goal is to see local avalanche centers develop pathways to sustainability and effective operations that save lives in the mountains.